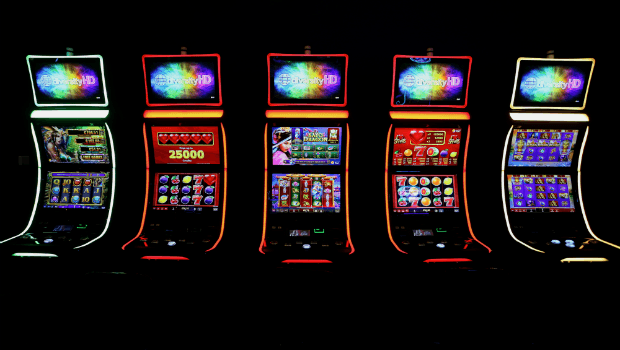 Before the age of the online casino, slot machines were restricted by what the manufacturers could put in the box. However, the advent of the internet unleashed the creative imaginations of software and game designers. Players can embark on epic magical journeys; explore other countries or historical periods; and meet film stars, gods and monsters.

Yet despite the large variety of slots games that modern gamblers now enjoy, there is still much these game types have in common. Read on for a rundown on some of the online slots you might come across.

Taking inspiration from the old one-armed bandits found on every casino floor and fruit machines that populated early brick-and-mortar casinos, the online versions pay tribute to those classic slots. While they might not have the bonus features, graphics or stories that come with more modern video slots, they are easy and fun to play.

By far the most common, many online slots today feature five reels, with paylines ranging from five to 50, although they can go much, much higher. This platform is home to the most popular 3D video slots, which feature high-end graphics and stellar sound to offer a video game experience.

Many of these games have a narrative story along with a number of bonus games that can be activated during the main play. These use scatter and wild symbols to offer multipliers, free spins and cash wins, providing players with more ways to win than matching symbols on a payline.

Well-known 5-reel slots include NetEnt’s Gonzo’s Quest, Amaya’s Druidess Gold and Williams Interactive’s OMG! Kittens. It is also common to find games based on characters from films, TV shows and comic books, such as "Judge Dredd," "Planet of the Apes" or "The Voice."

One of the ways in which modern online casino games have evolved has been the increased opportunities for players to win. In addition to offering bonus multipliers, rounds and symbols, they have added numerous payline shapes on the same spin, meaning players could land on multiple paylines and get the best one.

Originally there were 243 ways to win on each spin, but slot game makers have since created even more ways, often by expanding the reels from five to six. IGT’s game Day of the Dead offers 720 ways to win, while Williams Interactive’s game Raging Rhino features six reels and a mind-blowing 4,096 ways to win.

RELATED: How To Pick A Winning Slot Machine Game

Online slots often have a maximum jackpot that can be won by landing a full payline of the highest-scoring symbol. However, progressive jackpots offer a collective jackpot, similar to a lottery. A small portion of each player’s wagers is siphoned off into a pot for all players of that progressive slot. Players have a chance to win this pot, either at random or by entering a bonus round.

Progressive slots are not exclusive to online casinos and have existed for quite a while in brick-and-mortar casinos. However, in this case all the machines had to be physically linked, meaning that the collective pot grew slower than its online counterparts, where hundreds of thousands of people are playing the same game, all contributing to the cash pot.

A progressive slot machine often has multiple jackpots up for grabs, usually slotting into one of four categories — mini, minor, major and mega — with each offering a different value. The mega jackpot is often in the millions, but the mini jackpot pays out more often. Popular progressive slots include NetEnt’s Divine Fortune and IGT’s Gong Xi Fa Cai.

In recent years, slot game developers have begun adapting games to work on smartphones and tablets. Early mobile slots simply replicated the online game but in a smaller browser window. Games were hard to play as they hadn’t been configured for the smaller screen.

But newer mobile slots are specially adapted to work on a smartphone or tablet touch screen. The reels fit the screen space, and there are special touch buttons to spin the reels, add coins or access the paytable.

Often, a lot of the peripheral graphics and backgrounds are removed to save space. However, the player still has access to great gameplay and the same amazing bonus features. Most modern mobile slots are programmed in HTML5 or JavaScript. This language is perfect for games to be played through a standard browser like Chrome or Safari. HTML5 slots also help producers avoid compatibility issues for players on iOS and Android devices.

The range of mobile slots is increasing daily. Most mobile casinos in New Jersey contain nearly as many free slots and real money games as the online casinos. You can reload funds with a single tap too by visiting the Cashier. You don’t even have to navigate away from the game when you do it.

So, which mobile slots should you try? Luckily, all good NJ-licensed slots developers have a range of games to play on a smartphone.

NetEnt’s excellent Touch range of slots work exclusively on mobiles. Play 15 win lines in Lucky Angler Touch and trigger sticky wilds or a free spins bonus. Big Bang Touch is a fun mobile slot with big jackpots worth 32x your stake. And Piggy Riches Touch has a generous free spins bonus where you can win up to 28 free games.

You can also play a progressive slot on your mobile. Join thousands of other NJ players and hit the jackpot in games like Mega Fortune Touch by NetEnt and WMS’s Asian-themed 88 Fortunes mobile slot.

Multipliers appear in all types of slot machines. They are special modifiers in online casino slots that can help to increase your win. Multipliers can be built into the game mechanic, or they might appear as symbols on the screen. In their simplest form, multipliers are attached to special symbols like wilds. For example, you might earn 2x on a winning combination if it includes at least one wild symbol.

Multipliers can also appear on the reels as symbols in their own right. You will earn 2x on a win if a 2X symbol appears on an active payline. You might also be able to combine multipliers on the same line. For example, land a 2X and 3X symbol in the same payline and you would earn a total of 5x your win.

Multipliers can also appear in bonus features. Free spins bonuses often include bonus multipliers that are applied to any win you make.

Multipliers are common features in modern 5-reel slots, but they can add volatility to the gameplay. Test out our free slots and find a game that’s right for you.

RELATED: How To Win At Slots

Bored with playing just one set of reels? Why not play multiple sets at the same time with MegaSpin slots? They are one of the most exciting types of slot machines around today.

MegaSpin video slots have been around in Las Vegas and Atlantic City for a while, but Microgaming has usually led the way with its online slots brand. In MegaSpin slots, you get to play 4, 6 or 9 games at once.

Depending on what number you choose, that amount of reel sets will appear on the screen at the same time. Each set of reels spins independently from one another, giving you multiple chances to win a prize. MegaSpin slots often feature a generous spread of betting options too.

So, which MegaSpin slots do you choose? We recommend Double Magic MegaSpin with its wild symbols and big payouts up to 1600 coins. For more action, check out High 5. The game has wilds, big-paying multipliers, and a 15,000-coin jackpot slot.

Of all the types of slot machines available today, multi-payline games offer the most action. We’ve already mentioned 243 ways to win, but there is a growing trend for online slots with variable paylines as you play.

Multi-payline slots can offer anywhere from 243 to 3125 ways to win. And some games, such as BTG’s Megaways range, give you the chance to hit over 117,000 ways to win on every spin.

In Megaways online slot machines, each reel can contain anything from 2 to 7 symbols. The number of available paylines can therefore vary on each spin. These games also feature bonus rounds like unlimited free spins. Some of the best Megaways slots are now 100-percent legal in New Jersey. Try Big Time Gaming’s Bonanza slot or WMS’s Raging Rhino Megaways slot with high volatility action on every spin.

Video slots are easily the most popular types of slot machines in 2020. And most slots on NJ casino floor will be video slots.

The original slot machines were mechanical beasts made up of physical reels and tumblers. These were programmed with rudimentary stops that would determine where and when the slot reels would come to rest. In the 1970s, manufacturers began developing video slots. The Fortune Coin Company released Fortune Coin in 1975, the first slot to use a video terminal instead of physical reels.

But it wasn’t until games like WMS’s Reel ‘Em In were launched that video slots really took off. Reel ‘Em In used a CPU to determine the gameplay. However, the player used physical buttons to choose bets and start the spin.

The advantage of video slots over a traditional slot machine that is mechanical is that developers can find room for more innovative features. Video slots may feature multiple reels and rows, and a range of paylines to suit the developer’s needs.

Video slots also use computerized RNGs (Random Number Generators) to determine the outcome of every spin. RNGs assign an algorithm every time you hit the Spin button. The algorithm links to a position on the reels to determine where it stops. RNGs are tested for complete fairness.

Video slots can also make full use of the software used to design them. Branded slots like NetEnt’s Guns ‘N Roses may feature actual video footage of the source material, complete with HD sound.

For the most exciting types of slot machines, look for 3D slots. 3D online slots use the latest computer design to create immersive games with slick graphics and animation. 3D slots often feature innovative bonus rounds and even intro sequences. Get a feel for the characters and theme before you even spin the reels.

Essentially, 3D slots go the extra mile in offering players well-designed graphics. Symbols feel 3-dimensional and will animate when they form part of a winning combination. There may even be a character who stands by the reels, performing actions as you play.

3D slot machines sometimes feature a bonus round with several levels. Unlock the levels as you spin and progress through the bonus tiers. You can even save your progress and come back for a game later.

BetSoft is the master of the 3D slot. A good example is its Back to Venus slot machine game. This sci-fi themed slot features a gang of invading aliens who fire flowers onto the reels to create sticky wilds.

Or immerse yourself in the world of the Mafia with BetSoft’s Slotfather slot. The game features authentic sound effects and music and a gangster theme. When you land on the hoodlum symbol, the character will pull out a machine gun and pepper the reels with random bullet holes. Choose a bullet hole to reveal a number of free spins plus multiplier.

There are countless types of slot machine available to gamblers in New Jersey. And now, you can play 100-percent legal online slots at home. Sign up to the best legal and regulated casinos in NJ and earn a welcome bonus. You can claim free cash while playing your favorite slots by NetEnt, WMS and more.