The Most Famous US Gamblers of All Time 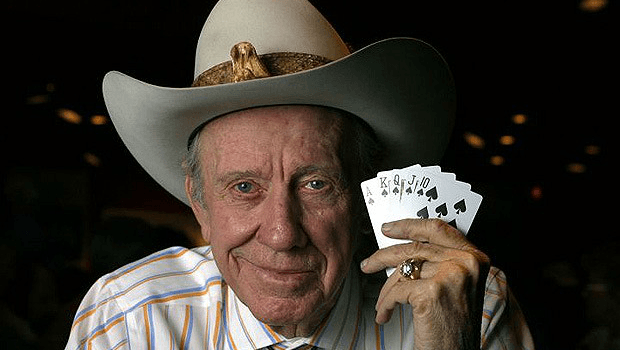 Every professional gambler in the US has already beaten the odds by making bets for a living. Only a few have risen to the top to reach truly elite status. And these famous gamblers are absolute legends. By playing and winning more than most people will ever see in their lifetime, our list of famous gamblers really are the rock stars of their world.

Of course, we’re not suggesting you try to follow in their footsteps. However, if you’re looking to bring down the house in your own small way, these gamblers could teach you a thing or two. So, with that in mind, let’s take a look at our list of the most famous American gamblers through the years:

For sheer tenacity and ingenuity, Amarillo Slim is without question the best gambler of all time. Originally a poker player from Texas who joined forces with Doyle Brunson and Puggy Pearson, Slim eventually became the most famous pro bettor in the world. Even though he never lost touch with his professional poker roots, it was his exploits away from the poker table that caught the mainstream media’s attention and earned him considerable fame.

For example, when he said he could beat a racehorse in a 100-yard dash, everyone thought he was crazy. However, what people didn’t account for was the rules Slim thought up. Instead of running in a straight line, the race was 50 yards in one direction and 50 yards in the other. The end result was a victory for the dry-witted, canny gambler.

This type of ingenuity was common across all of Slim’s bets. Whether it was beating a pool champion using a broom handle or table tennis pro with Coke bottles, Slim was a master bettor and one the likes of which we’ll probably never see again. He died in Amarillo, Texas, at the age of 83 in 2012.

If ever there were a rags to riches story in the betting world, Archie Karas would be it. Arriving in the United States from Kefalonia, Greece, Anargyros Nicholas Karabourniotis had only $50 in his pocket when he went to Las Vegas in 1992. However, within a span of two years, he turned that into more than $40 million. Admittedly, Karas did receive $10,000 to kickstart his run, but what transpired was beyond anyone’s wildest expectations.

Through a combination of high-stakes games of poker, blackjack, roulette and baccarat, Karas won more in two years than probably anyone in history. Unfortunately, his dance with lady luck came to a disappointing end. As quickly as he amassed his fortune, he lost it all. However, the ride to the top was certainly an unforgettable one for the 69-year-old.

Many people who enjoy some form of sport believe they can make a profit betting on their interest. In reality, however, sports betting is a skill. Although the average bettor can get lucky on a hunch, the real pros will analyze stats, assess the betting lines and do everything in their power to find a positive expected scenario. Billy Walters is a man who mastered these skills better than almost anyone in history.

Walters started his betting career at age 9 when he used his paper route money to bet on the 1955 World Series. In later years his bets would continue to increase until he was wagering millions of dollars every week. As well as his own skills, Walters would employ a team of math experts and industry insiders to help him place thousands of bets each year. In fact, such was Walters' power that he could move the betting lines each time he made a bet on account. For that reason alone, Walters is a U.S. gambling legend.

Now aged 73, he's in prison, serving five years for masterminding an insider-trading scheme and is scheduled to be released in early 2022.

In recent years, poker pro Phil Ivey has emerged as a worthy member of the legends club. As well as being the best poker player in the world, Ivey famously won more than $20 million during two baccarat sessions. Even though legal issues with casinos in London and Atlantic City eventually erased his win, no one can deny he’s a force in the gambling world.

Perhaps the main reason Ivey, 43, is worthy of this list is his ability to spot the weaknesses in a game. Much like he can look at an opponent at the poker table and find their faults, Ivey can do the same in the betting world. Whether it’s an issue with the cards that gives him an advantage or a sports bet where the odds are slightly out of line, Ivey can always find an edge. Because of this, he’s more than worthy of sitting alongside our US gambling legends.

Bill Benter is widely considered the wealthiest gambler in the world, and his personal fortune speaks for itself. Benter developed a horse racing algorithm for Hong Kong horse racing in the mid-1980s, the likes of which no one had ever seen.

Benter’s gambling journey started when he moved to Las Vegas in his early 20s. He was soon introduced to the leader of an Australian card counting team, Alan Woods, who impressed Benter with stories like the time he snuck $10,000 in his underwear through Manila airport security.

Benter was soon earning $80,000 per year counting cards with Woods. Self-taught and brilliant, Benter learned advanced stats and programming. Eventually he built a horse-racing algorithm and went to Hong Kong in 1985 to test the system. He lost roughly $120,000 the first year and won $600,000 the next. After a few key tweaks to the algorithm, Benter made $3 million in the 1990-91 season. The algorithm worked and the dollars continued to roll in.

Benter continued to improve his system in a manner now emulated by statistical-driving horse racing and sports betting methods that have taken over the business. He eventually became a public figure, giving talks at universities and publishing a paper on his strategies. It is estimated he earned roughly $1 billion from his horse racing business, making him the wealthiest gambler of all time.

A mathematics expert born in 1932 in Chicago, Thorp wrote “Beat the Dealer” – still considered the bible of blackjack card counting – in 1966.

Thorp devised the strategy and probability theory discussed in the book while studying mathematics at UCLA and later working at MIT in the late 1950s. Thorp eventually traveled to Reno, Lake Tahoe and Las Vegas to play blackjack and test the methods in the field, winning $11,000 his first weekend counting cards at a casino.

He continued to put his research to work and eventually took to wearing disguises so he wouldn’t be caught by casinos increasingly aware of his reputation. He also developed a wearable computer to win at roulette before the devices were banned at Nevada casinos in 1985.

Thorp later applied these same theories and principles to the stock market, with his hedge fund company earning a remarkable 20% return on investment over 30 years. His net worth is approximately $800 million and his gambling methods changed the game forever. Many current practices like shuffling blackjack cards before the end of the deck and other card-counting prevention steps are due to the casino gambling methods this man implemented more than 50 years ago.

Poker enthusiasts will never forget where they were when Chris Moneymaker won the 2003 World Series of Poker on ESPN. The sports network had been airing poker tournaments for years, but recent innovations such as the pocket camera – allowing viewers to see players’ cards as the hand progressed – made for a much better broadcast.

An online poker player drowning in credit card debt, Moneymaker found his fame after he qualified for the 2003 World Series of Poker at age 27 thanks to a $39 buy-in satellite tournament with PokerStars. The move paid off big time for both parties – Moneymaker beat Sammy Farha heads-up at the final table to win the $2.5 million prize, and PokerStars received tons of publicity throughout the tournament.

Moneymaker was nearly knocked out in what became one of the most famous hands in WSOP history. Moneymaker bluffed and went all-in holding King high, while Farha had a pair of nines. Farha folded, giving Moneymaker a huge chips advantage. Professional poker TV commentator Norm Chad referred to it as “the bluff of the century” on the broadcast.

Suddenly the amateur poker player from Tennessee was an overnight star. The Cinderella story aligned perfectly with rapidly increasing quality of televised poker broadcasts. Poker exploded in the following years in a manner that will likely never be duplicated.

The story of the Massachusetts Institute of Technology blackjack team is so spectacular it inspired the 2008 movie “21” starring Kevin Spacey – though it played fast and loose with the facts. The actual story started with Harvard student Bill Kaplan, who developed a blackjack card counting method and moved to Las Vegas in 1977. He turned $1,000 into $35,000 over nine months before finishing his degree at Harvard.

Kaplan began managing card-counting teams in Las Vegas and had considered forming a team on the East Coast. A chance encounter with MIT student JP Massar began one of the most infamous gambling stories of all time.

Massar and a few fellow MIT students had already studied card counting and formed a club of sorts. Kaplan began even more formal training, while the group eventually branched out to include students from other universities. Using a highly disciplined system and working in pods, the crew would regularly travel to Las Vegas and use various codes and signals at the table to indicate when the bettor should start increasing their wagers.

Members of the group were eventually going to Las Vegas to play nearly every weekend, making sure to keep a low profile. The group was bankrolled by multiple investors and players usually received about $80 per hour – though the penthouse suites and trips were all free.

The team worked for nearly a decade with various members coming and going, employing nearly 80 members at one point while counting cards across the world. But casinos were getting better and better at catching counters and many of the team members were banned by the early 1990s. Casinos eventually hired investigators to look into the players they’d banned and discovered the MIT connection due to all the Cambridge addresses. Most of the top players were eventually run out and the group dissolved in 1993.

Nowadays, similar operations would be nearly impossible to carry out thanks to facial-recognition software and advanced card-counting prevention techniques. But the MIT blackjack teams remains one of the most sophisticated and successful gambling operations of all time.

Who is the richest gambler?

Bill Benter is believed to be the richest gambler of all time. He developed a sophisticated horse racing algorithm in the mid-1980s, beginning a gambling career in which he earned roughly $1 billion.

Who is the most famous gambler?

That’s up for debate, but many would argue Archie Karas is the most famous gambler ever. His rapid rise and willing to risk insane amounts of money is the stuff of legend, though he eventually burned out and lost it all.

Who is currently the most popular gambler?

Phil Ivey is likely the most popular current gambler. His World Series of Poker success began at a young age and he has plenty of charisma, amassing a fortune through a variety of casino games before age 40.

Can you make a living off of gambling?