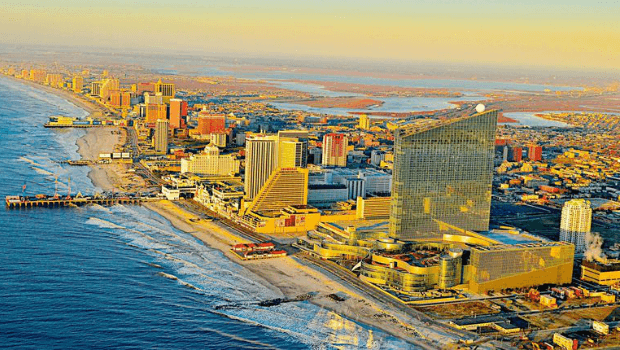 With not one but two new casinos due to open in Atlantic City over the summer, now is the perfect time to visit the city famous for its boardwalks and beaches. But before you jet off to chase down Steve Buscemi, check out our handy guide so that you get the most out of your time at the casinos in ‘The World’s Famous Playground’.

In Atlantic City the drinks are free as long as you’re playing on the casino floor. But it’s important to remember that too much alcohol will dull the senses, so if you’re playing a serious game you might want to pace yourself. However, if you are simply playing for fun, go wild. Some of the casino watering holes even have slot machines at the bar, so you can order free drinks while you play.

If you’ve never been to a brick-and-mortar casino before, player cards are the equivalent of loyalty or VIP schemes at online casinos, or your free coffee stamp cards. Most of the resorts in Atlantic City offer a reward card, letting you accumulate points every time you play at the casino, shop in the hotel, or make future bookings either in Atlantic City or one of the hotel’s sister sites. Once you’ve garnered enough points, you can use them to earn gaming points, or to get discounts on meals, room prices or holidays. Most will also act as a gateway to exclusive competitions and giveaways run by the resort.

Although it’s a beautiful resort, the New Jersey weather can be sporadic. To save you getting caught in a rain shower, several of the casinos have inter-connected walkways and bridges so you don’t need to go back out onto the boardwalk. The Taj Mahal links up to both The Showboat and to Resorts Hotel and Casino. Caesars Palace also shares a passageway to Bally’s Atlantic City Resort.

Atlantic City comes to life at night, so if you want to blow off some steam away from the casinos, there are plenty of nightspots to choose from. Many of the clubs offer free entry before 10pm, but you can always return later once your hand has been stamped with the club’s brand. So if you want to go clubbing later but still want to stay at the casino for a while, you can quickly pop out and claim your free entry for later.

Although many people come to Atlantic City for the casino action, there’s plenty to see and do if you want to have a break or luck out and spend your betting budget. The Absecon Lighthouse is New Jersey’s tallest lighthouse, and climbing up its 228 steps offers a panoramic view of Atlantic City and the Atlantic Ocean. If you stroll down Atlantic Avenue all the way to neighbouring Margate City, you can climb inside Lucy the Elephant, a six-storey roadhouse attraction that’s now a National Historic Landmark.

Although the HBO show Boardwalk Empire was set in Atlantic City during the 1920s, the show itself was mostly filmed in producer Martin Scorsese’s native New York. Years after it ended, fans are still able to explore the history behind some of the real-life characters that inspired the show.

Steve Buscemi’s character Nucky Thompson was based on the real-life corrupt Atlantic City treasurer Enoch ”Nucky” Johnson. Just like his on-screen counterpart, he stayed as a permanent guest at the Ritz Carlton Hotel, taking over a full floor. The building is now private apartments, but visitors can see remnants of the hotel in the lobby.

If you’re a little peckish, why not try the Knife & Fork. The original restaurant opened in 1912 by the mayor of Atlantic City and was frequented by Enoch Johnson during prohibition, as the rules were ignored within its walls. The eatery has changed hands many times, but has now been renovated and restored.

This tip might not be the most glamorous, but it’ll save you money that can then be spent inside the casinos. If you drove to a particular casino, make sure you keep your parking receipt – they can be used at the next casino so long as you leave before sunrise. Lots of restaurants also offer reduced or free parking vouchers, but you may need to ask for them.