US Athletes You Would NOT Want to Meet at the Casino 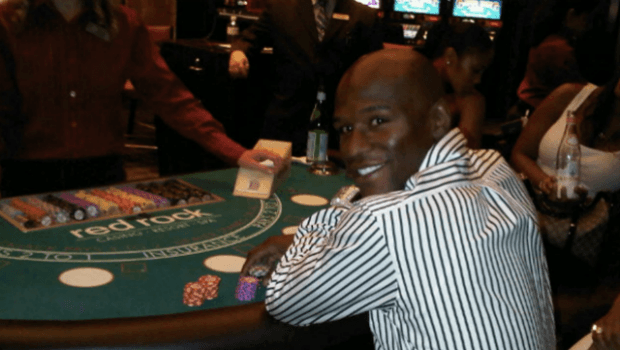 Psychologists and behavioural scientists have often commented on the obvious links between sports stars and gambling. The familiar and sought-after endorphin rush of ‘winning’, whether that be at the roulette wheel or on the blackjack or poker table, compels a number of professional sportsmen and women to visit the casino.

However, these world-class athletes may be the masters at their chosen field, but that doesn't necessarily translate into a smooth gambling experience. In fact, we think there are some US athletes that you would definitely not want to meet at the casino…and for wildly varying reasons.

One of the main reasons for not wanting to bump into Floyd Mayweather in a casino is the fear of spilling his drink – he’s widely regarded as one of the greatest pound-for-pound boxers of all time, with a perfect 50-0 record.

The other reason is that he seems to have a knack of placing winning bets. And as we know, there’s only so much luck that can prevail in a casino.

It’s unsurprising that a man nicknamed ‘Money’ is no stranger to throwing paper around with gay abandon, and there are countless stories of him wagering seven-figure sums on basketball and American football games. And, it has to be said, with some success too.

Of course, every punter has their ups and downs, and the rumours that Mayweather lost $10.4 million on Super Bowl XLVIII – something the boxer himself denies – often resurface. “The only thing I would bet $10 million on is myself, because from the looks of my record, I’m a guaranteed win,” was his rather humble response.

The American swimmer is the most decorated Olympian of all time with a rather handsome collection of 28 medals – which includes 23 golds.

Looking at his record on dry land, it seems as if his prowess in the pool is matched by his skills at the poker table…bad news if you find yourself up against the 32-year-old in a cash game at the casino.

Phelps has already qualified for a World Series of Poker event, and during another tournament he live-tweeted his chip stack, which at one point sat at around $100,000.

If you sit down at the table only to find Phelps staring back at you, it might be time to make your apologies and head for the showers.

While the term ‘athlete’ might be gilding the lily somewhat, John Daly is an outstanding golfer. A two-time major winner and one of the longest drivers the sport has ever seen, his place in golfing folklore is secure.

But his nickname of ‘Wild Thing’ gives an indication of Daly’s appetite for self destruction, and tales of excess are never far from the lips of those who know him best.

The 52-year-old appeared on the ESPN documentary series ‘Hit it Hard’ to talk of his exploits in the US’ various casinos, and he revealed that he had lost some $50 million at the blackjack and roulette tables as well as slots.

And then there was the now legendary story of how Daly threw $65,000 in cash out of a car window following an argument with his ex-wife. “I won like 65 grand in the casino, and I said, ‘If you’re going to yell and scream at me about this...’ and I threw it over the bridge going over to Memphis from Arkansas,” he recounted.

Wild Thing is a likeable rogue, and the kind of good-time guy who has the ability to suck people in around them and ensure they’re having a good time, too. If you bumped into him in the casino, however, it may cause you to lose more than just your life savings.

‘A-Rod’ is regularly cited as one of the greatest baseball players of all time, and as is often the case his genius has been tainted with misdemeanours and controversy in his private life.

Admitting taking performance-enhancing drugs, Rodriguez has also been accused of infidelity and was responsible for a string of misdemeanours on the field of play, too.

As disabling to his career was the great scandal of 2011, where it was alleged that he had taken part in illegal underground poker games, including those organised by Molly Bloom – the subject of the Hollywood movie ‘Molly’s Game’ starring Jessica Chastain.

He’d been warned by the NBA in 2005 for his involvement in gambling, and the allegations haunted him until his retirement from baseball in 2016.

Why would you not want to meet A-Rod in a casino? Because he’s clearly a very experienced poker player. Allegedly.