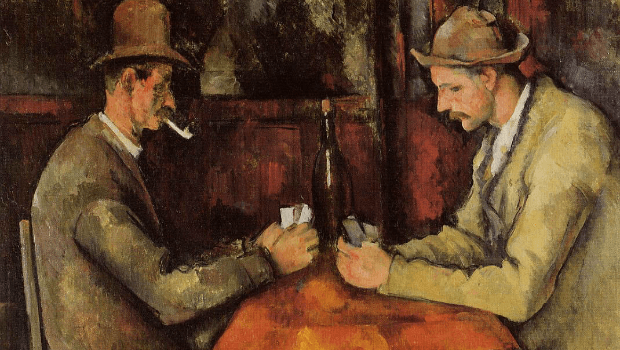 Creative minds are often drawn to gambling, for better or worse. It's brought many a great artist, musician or writer to their knees, just like any other vice, and yet also inspired some truly outstanding works.

We tend associate certain songs with gambling thanks to the essentially unbreakable bond between glitzy performances and Las Vegas casinos, but the highs and lows of games of chance, or perhaps more specifically the people involved in them, have been just as enticing to artists over the generations. Here are a few of the most well-known works inspired by gambling.

Regarded as one of the greatest portrait artists of the 20th century, Lucien Freud is perhaps best known for his portrait of Queen Elizabeth II in 2001, but his career spanned over 60 years. He was notoriously private, and tended only to paint people he knew. He also had a serious gambling problem, and in the early days of his career, before he was successful, would pay the debts to his bookies with paintings.

Given his almost constant involvement with gambling, he got to know a number of bookies well. Some of them even posed for his paintings, including Victor Chandler, a horse racing bookmaker who hit it off with Freud. The artist's picture of Chandler, entitled 'Man In A String Chair' is one of Freud's most iconic works, and valued at over £4 million.

Paul Cézanne was arguably one of the most important artists of the modern era, and also perhaps partly responsible for the stereotype of the reclusive genius. In his final period of painting particularly, he found it difficult spending time with others, instead opting to spend his last years painting alone in his studio. Interestingly, much of his initial work was mocked and rejected, until his work was embraced by the younger generation.

'The Card Players' is actually a series of five paintings he worked on between 1890 and 1895. Interestingly, none of the pieces show actually depict gambling – rather just friendly games of cards at a café. There are no wagers on the table, and perhaps this is an important message (although likely not deliberately incorporated by the artist, as he wasn't interested in gambling per se);rds can be just as enjoyable without stakes of any kind. Despite this fact though, the paintings have long been associated with gambling, and actually inspired the next pieces we're going to look at.

While it might seem a little less highbrow than the works already mentioned, 'Dogs Playing Poker' by Cassius Marcellus Coolidge are some of the most well-known gambling related paintings around today. Yes, I said 'paintings' because as mentioned above, the title actually encompasses a series of 18 paintings commissioned by Brown & Bigelow, a publishing company, to advertise cigars. Again, perhaps as not as highbrow as some other works, but there's an interesting twist to these pieces.

Each painting features a variety of dog breeds playing games of poker (often smoking cigars for obvious reasons), and they've been featured in everything from TV shows like 'Cheers' to films like 'The Accountant'. Even 'Rick and Morty' has a reference to these works in the episode 'Lawnmower Dog'. It's this almost constant referencing that led these pieces to be regarded as kitsch for a long time, but more recent critics have claimed that despite being commissioned as adverts, they also satirise the excess of the upper classes. Regardless, it's hard to argue with how instantly recognisable these works have become.

There are lots more pieces of art inspired by gambling as well of course, including more modern works by Michael Godard, which almost exclusively feature gambling or nightlife related themes thanks to his fascination with Las Vegas. Hanne Lore Koehler, who has a vibrant and energetic style, has also produced some very striking works inspired by horse racing.

Given the often high values of many renowned paintings, especially those mentioned above which feature cards or gaming in some form or another, the connection between casinos, gambling and art is one that's likely to remain as strong as it always has, and that means there'll be many more works both celebrating and cautioning against the world of gambling to come.

Jon Young is a writer and magazine editor with over 12 years' experience in the gaming sector. He has written on everything from poker and slots to casino, sports betting and mobile gambling. When not trying to take down the Mega Moolah jackpot he can be found playing poker tournaments in casinos.