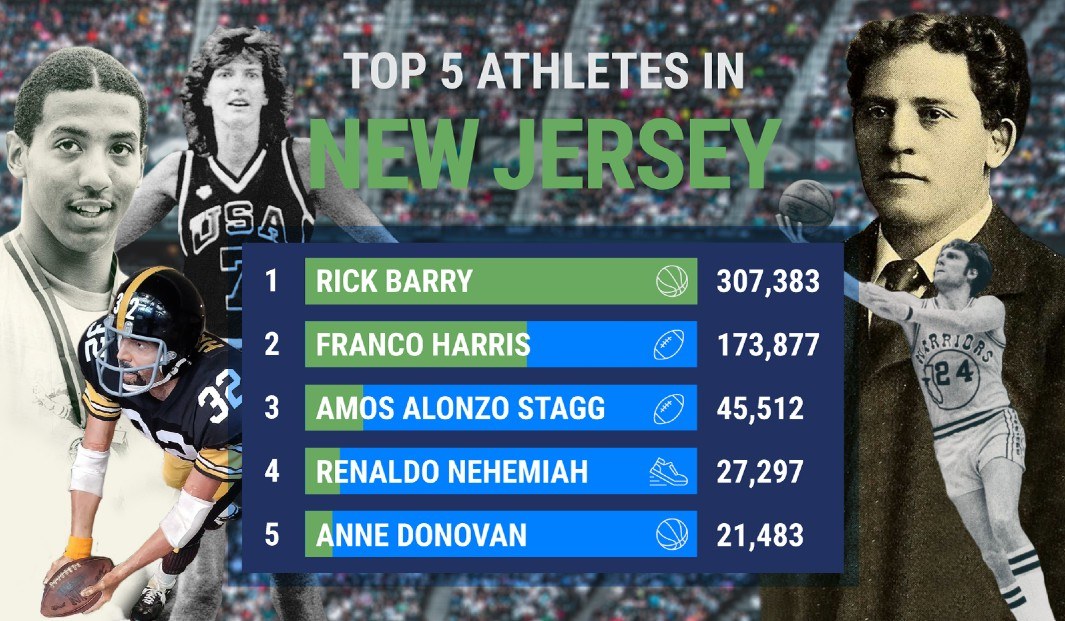 Learn A Little More About Each Hometown Hero

Topping the list as most revered athlete in his native New Jersey, Rick Barry enjoyed a formidable basketball career in the NBA during the 60s and 70s, including a spell at the neighboring New York Nets. Widely considered one of the sport’s greatest ever players, Barry is among the top scorers in NBA history, cementing his statewide legend status.

Former football star Franco Harris enjoyed a glittering 13-season NFL career during the 1970s and early 80s, and his legacy as a New Jersey great continues to this day. A four-time Super Bowl champion, including Super Bowl IX MVP, Harris is comfortably among his state’s most elite sportspeople.

The fact that it has been more than 50 years since Amos Alonzo Stagg died and he’s still among New Jersey royalty is a testament to his sporting stature. Football might have been the sport Stagg devoted the most years to, but he has a huge impact in basketball as well. He is credited with developing the game into the five-player sport we have today.

Specializing in the 110-meter hurdles, Newark-born Renaldo Nehemiah held the world number one spot in the discipline for four straight years between 1978-81, during which he became the first man to run the event in under 13 seconds. Track was Nehemiah’s strength, but he also had a brief career in the NFL as a wide receiver between 1982-84.

Though there were few opportunities for female basketball players during her playing years, the late Anne Donovan tasted back-to-back Olympic success as the U.S. team won gold in 1984 and 1988. As a coach, Donovan enjoyed further triumph, becoming the first woman to coach a WNBA team to a championship title in 2004, as well as becoming the youngest ever.

To rank New Jersey’s top five hometown heroes, we first collected data around the state’s most successful and prodigious athletes from Bleacher Report. From here, we analyzed each athlete’s Wikipedia page to assess visits during a twelve-month period between March 2020-March 2021. The athlete with the most page views during this time is considered their state’s leading hometown hero, with the next four making up the top five.

New Jersey Sports Betting Handle Back Above $1 Billion in October